Analysis of the research on state, needs and attitudes of citizens of the Republic of Serbia in the field of energy efficiency and renewable energy sources

Almost two-thirds of Serbian citizens are interested in becoming a “producer-consumer” of electricity, 45% of them are interested in state subsidies, while more than one-third of respondents are not familiar with state subsidies for the introduction of renewable energy sources in households, according to the latest research by the Environment Improvement Centre on the state, needs and attitudes of the citizens of our country in the field of energy efficiency and renewable energy sources.

Renewable energy sources for water heating, heating or cooling are used by only 3.8% of the households, mostly solar energy (3.2%), while geothermal energy is used by only 0.6% of respondents.

Citizens of Serbia most often use their own central heating (32.5%), district heating through heating plants (31.7%) and electrical appliances (15.7%). Solid fuel stoves are still a very common type of heating (almost 10%) and are almost five times more common in the countryside than in the city.

When we exclude respondents who use district heating through heating plants, the energy sources that we use the most for heating in the household are electricity (41.5%) and wood (29.3%). They are followed by gas (12.9%), wood biomass (12.3%) and coal (3.4%), while only 0.6% of households use energy from renewable sources for heating.

Electricity is used three times more in cities than in rural areas, where predominates the use of firewood. Coal as a heating energy source is significantly more present in rural areas than in the city, mostly in Southern and Eastern Serbia.

In the previous ten years, more than half of the respondents (58.3%) made an effort to raise the level of energy efficiency of their household. The most frequently performed works are the replacement of windows (68.7%), exterior doors (41.7%) and thermal insulation of walls (42.9%) and facades (40.9%).

93% of respondents believe that human activities are the most important cause of climate change, while more than three quarters completely refute the view that Serbia is one of the leading countries in the fight against climate change and believe that decision-makers do not deal enough with climate change.

Air pollution (67.1%), rising temperatures (58.3%), extreme weather conditions (43.8%) and declining quality and quantity of water resources (42.1%) are the four most common consequences of climate change that are most prevalent in Serbia according to the respondents.

Citizens (57.7%) are self-aware and recognize their own responsibility, while they also believe that the Government of the Republic of Serbia (74.8%), the Ministry of Environmental Protection (44.8%) and companies (44.65%) have the greatest responsibility in the fight against climate change.

The research clearly shows that there is a great interest of citizens to improve the energy efficiency of their households, to get involved in the production of electricity from renewable energy sources, and they have a high awareness of the seriousness of the climate change challenges. In addition, it is noticeable that stronger state support is needed in financing energy efficiency measures and the introduction of renewable energy sources, better information on state subsidies in these areas, as well as educating citizens about the consequences of climate change and their role in climate change mitigation activities.

The research was conducted in August 2021 and a total of 504 respondents from all over Serbia participated in it. 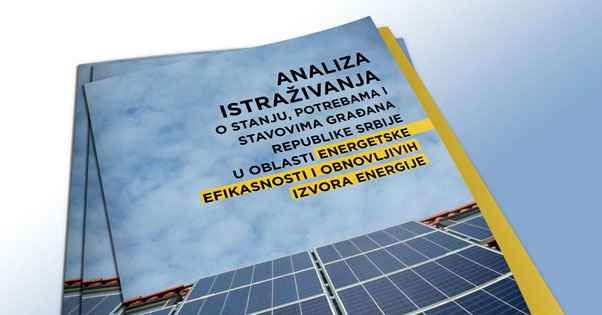