How the heat escapes
from our houses and apartments

How the heat escapes from our houses and apartments

Did you know that households in Serbia consume about 60% more electricity than the average household in the European Union? Having that fact in mind, an uninformed reader would think that the living standard in Serbia is far higher than in the EU countries, but we know this is not the case. The answer actually lies in the very poor energy efficiency that affects a large number of buildings in our country.

The poor condition of buildings and houses and higher energy consumption in Serbia do not only affect our wallets but also contribute to air pollution while distancing our country from fulfilling the obligations undertaken by signing the Paris Agreement. Detailed data are available for Belgrade, and according to the Action Plan for Sustainable Climate and Energy in our capital in 2015, the building sector (residential and public) achieved a share of 61% of total energy consumption in the city, while buildings are responsible for as much as 79% CO₂ emissions. In both cases, residential buildings play a dominant role in consumption and pollution.

Most housing units in Serbia were built in the period 1960-85. Unfortunately, these facilities are largely characterized by excessive consumption of thermal energy, since at that time there were no good enough construction standards that would aim higher energy efficiency. Similar thing is with buildings built at the end of the 20th century. At that time, there were actually relatively good regulations, but the application of regulations was at a rather low level. All this means that the citizens of our country mostly live in buildings that could be characterized as “energy wasters”.

However, not everything is lost, improvement measures that target the sore points of our buildings can greatly reduce heat energy losses and save on electricity and heating bills.

To find out how the heat “escapes” from our homes, we shot various objects in Belgrade with the special eye of a thermal imaging camera, and as the picture speaks more than a thousand words, let’s look at what we noticed. 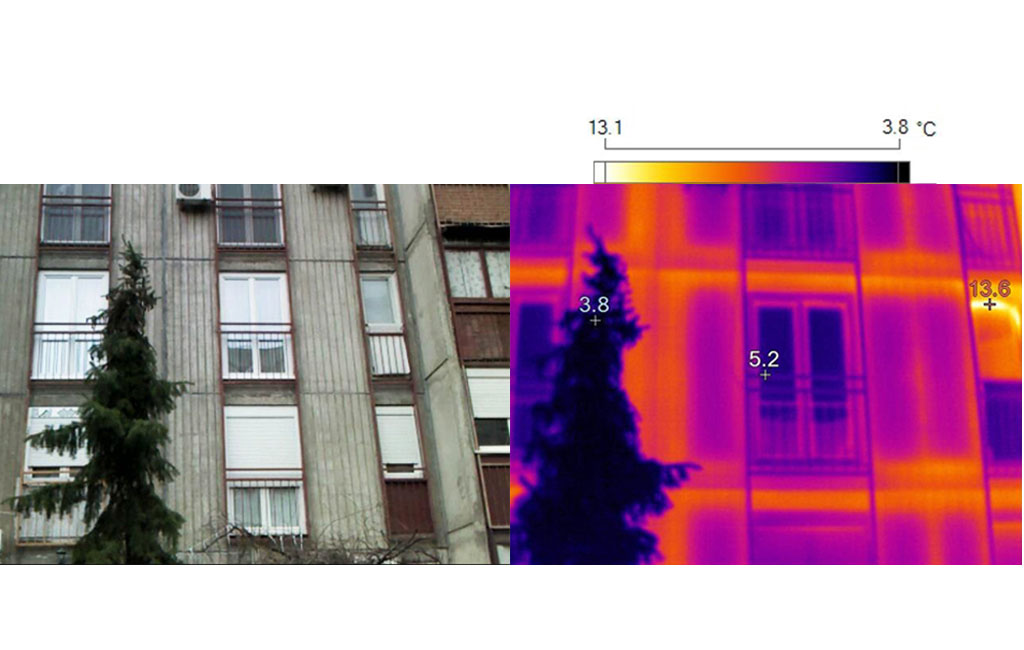 In this picture, it is visible how the walls, and especially the floor joist, simply radiate heat and effectively cool the rooms inside the building. On the right side, you can see a poorly installed window, where a large amount of heat escapes through the upper part. At the same time, in the middle of the photo, you can see how properly installed new PVC windows effectively stores heat. 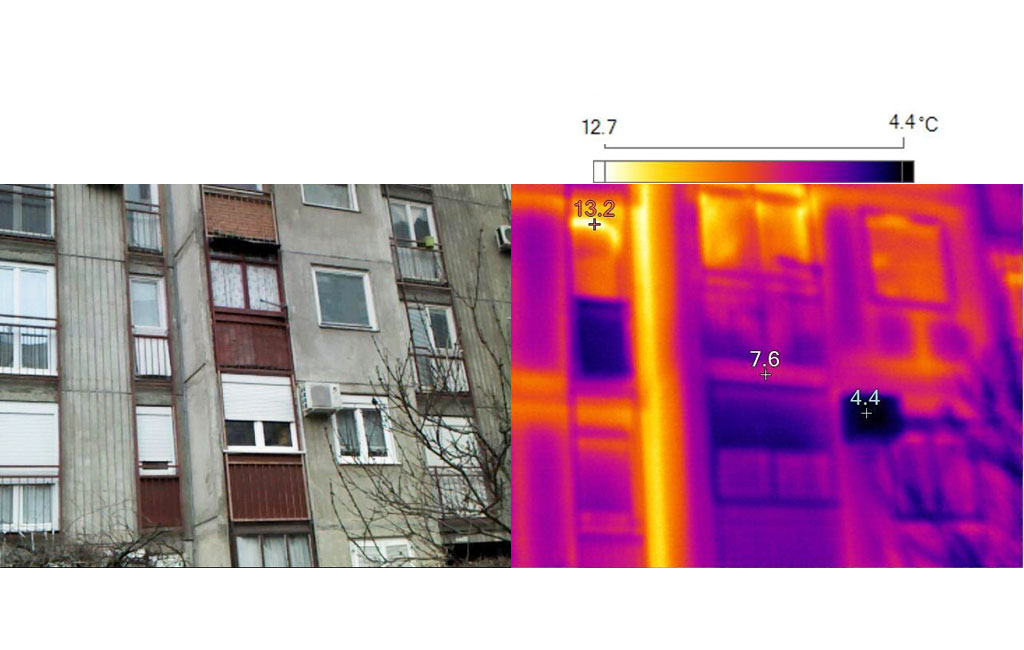 Perhaps a more drastic presentation of the impact of quality windows can be seen in this photo, where the thermal imaging clearly shows a large amount of heat coming out through the old windows on the upper floor, while on the floor below that is not the case.

Example 2 – Solitaire in block 37, built in the second half of the 60s 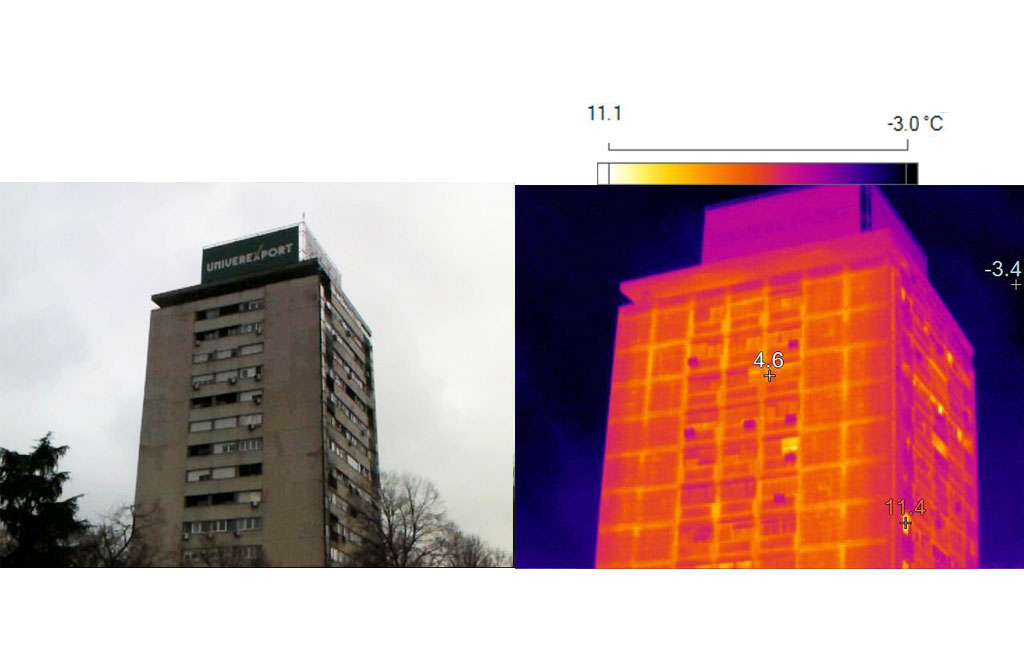 As in the previous case, it is very easy to see how the uninsulated concrete walls of the structure and the old windows lose heat and increase the bills for the residents of this building. 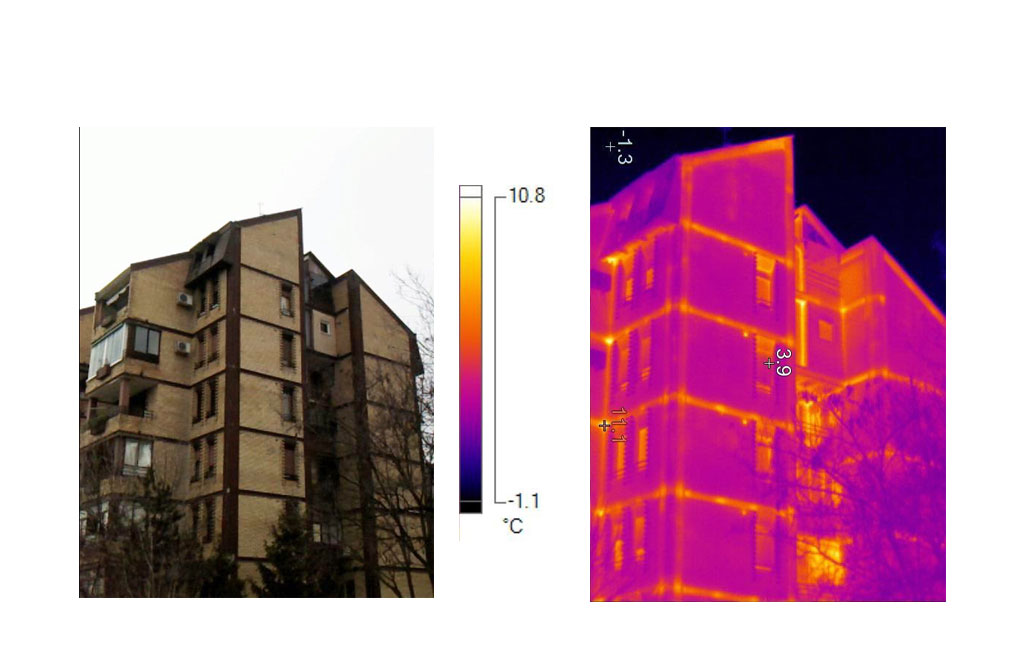 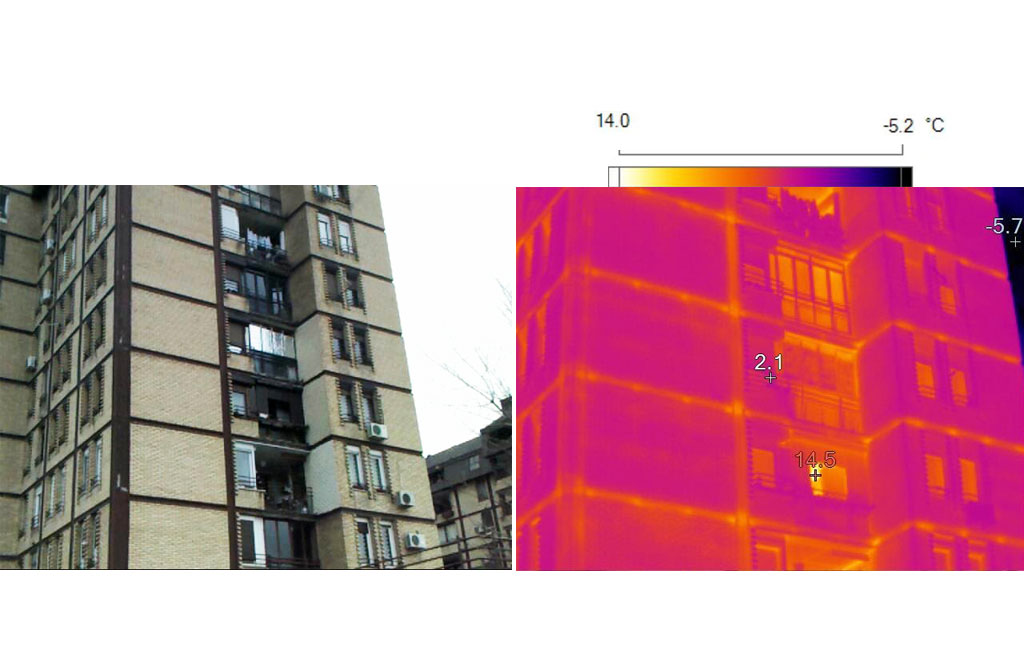 In the settlement of Cerak vinogradi, which was recently placed under the protection of the City, we see the same problems as in the blocks in New Belgrade. Joist structures and old windows are the main problems for tenants. Although the good news is that this settlement has been placed under protection, it also creates challenges for improving energy efficiency, because the works must be such as to preserve the original appearance of the buildings. 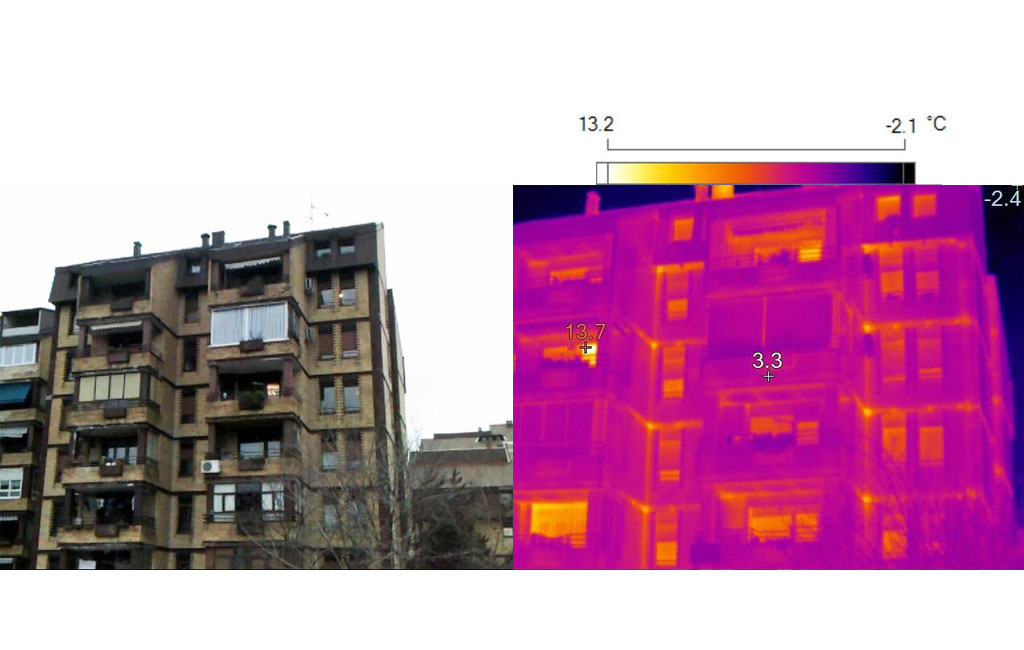 Although we are not fans of the trend of glazed terraces that is visible in our capital, in this case, the glazed terrace can serve as an illustration of how much the replacement of windows can reduce energy consumption for heating.

In the end, we will only add that this settlement has been a part of the permanent exhibition of the Museum of Modern Art in New York since 2019.

Example 4 – Genex Tower and the Eastern Gates of Belgrade

The Genex Tower and the Eastern Gates of Belgrade are representatives of the brutalist architecture for which the former Yugoslavia is known and represent the monuments of Belgrade. Foreign tourists are often photographed in front of them to show off good photos on social media, however, the view of the thermal imaging camera reveals a slightly different picture. 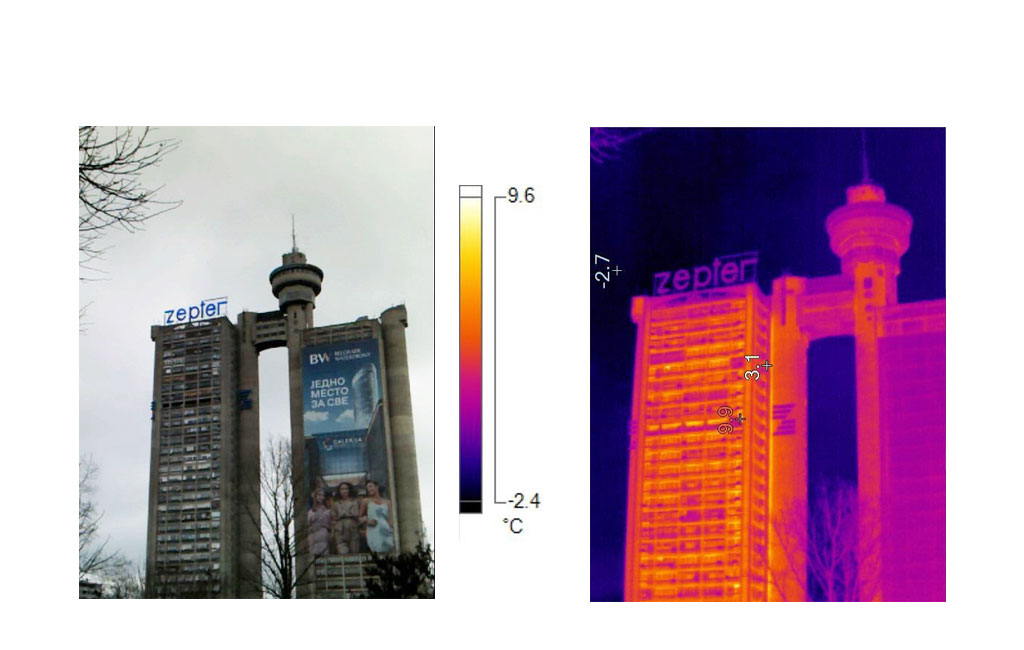 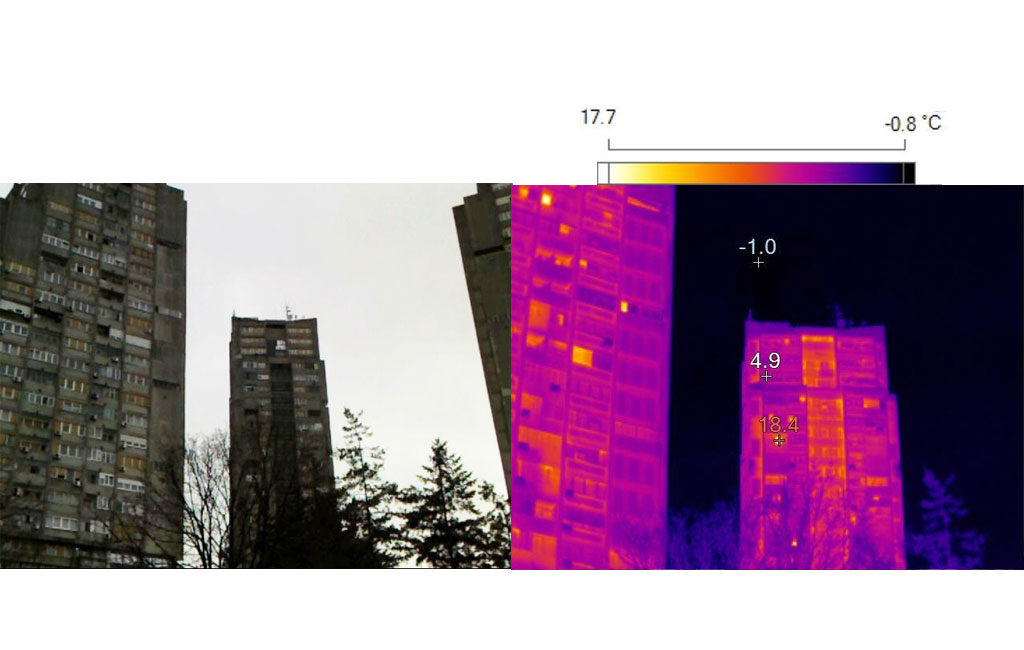 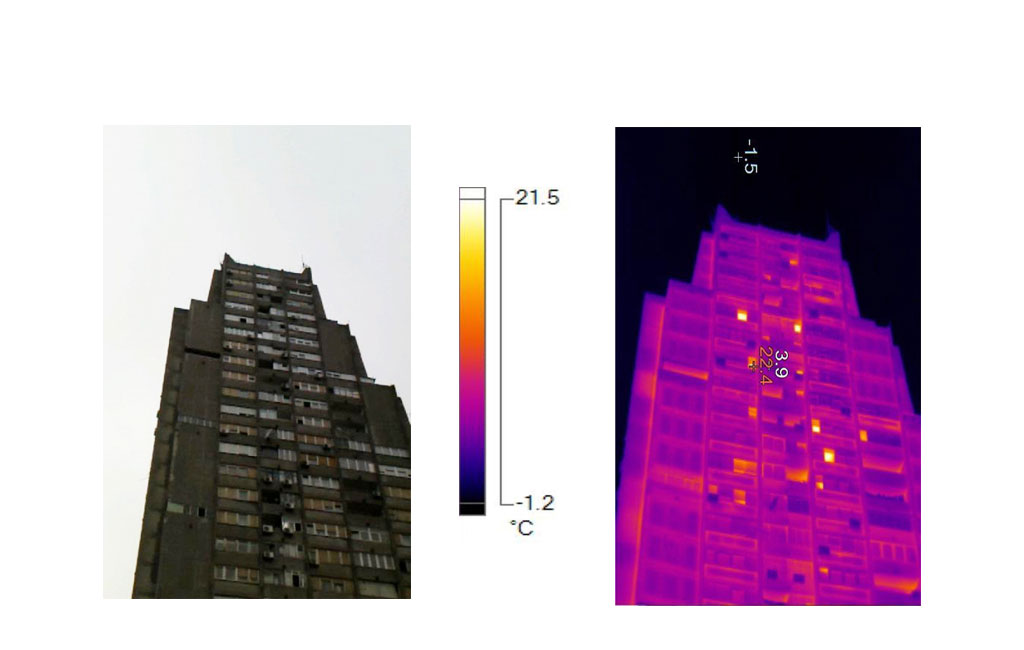 Similar problems we identified in previous examples can be seen in these buildings too. Interestingly, shots with the thermal imaging camera seems as if the buildings of the East Gate of Belgrade have one more row of windows than is the case. This is most obvious on the left side of the last photo.

The decay of the facades of these recognizable symbols of Belgrade is not only a problem for the residents who live in them, but also for pedestrians because there is a danger that parts of the facade will break off and end up on the sidewalk.

Renovation of these buildings in a way that respects energy efficiency standards is extremely expensive, and the question remains of how this problem will be solved with the help of the city. 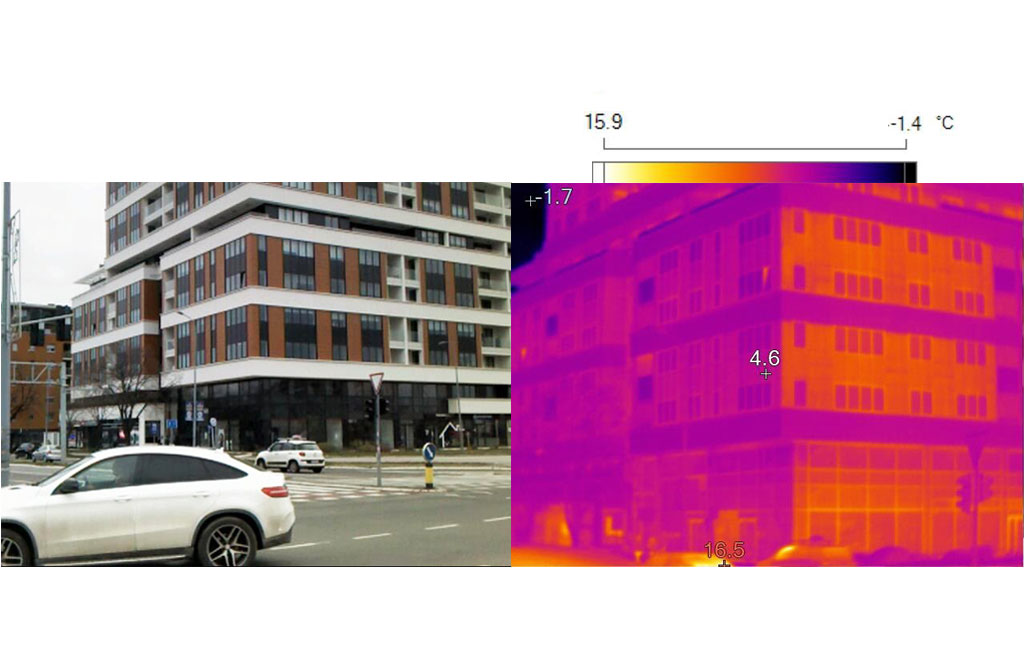 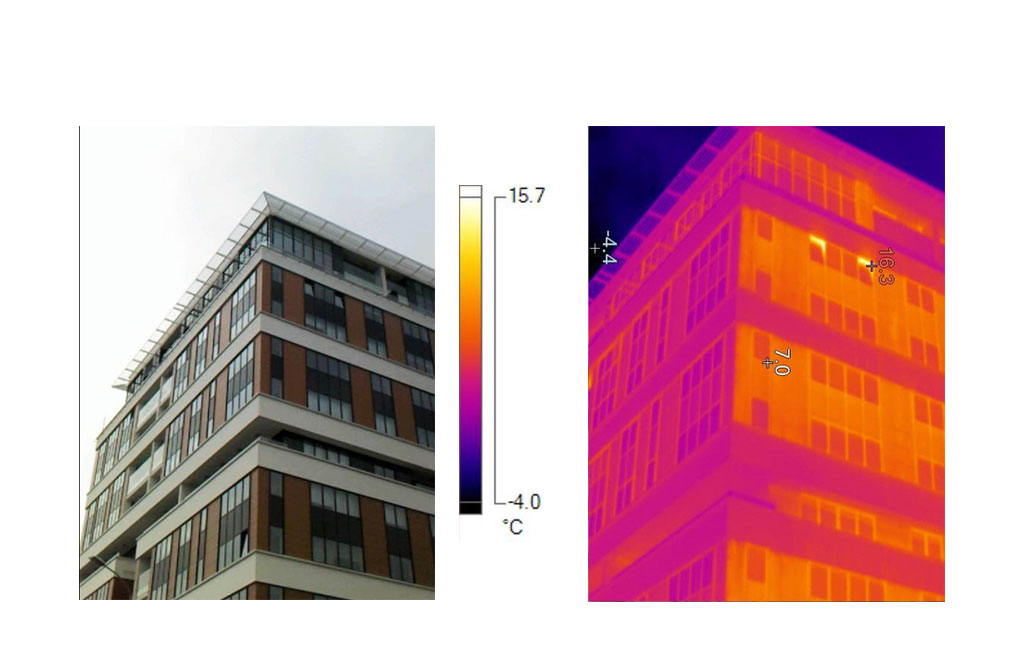 The new A block in New Belgrade is an example of a modern building designed to save energy. The right side of the building is exposed to the sun and therefore the temperature on that side is higher. The photos do not show places where energy escapes, and you can see a fairly uniform picture when it comes to temperature (excluding the two open windows at the top of the second photo).

Energy efficiency as the “first fuel”

The best fuel is one that you have never had to spend, so energy efficiency is often called “the first fuel” in professional circles, pointing out that any smart energy policy should start with encouraging energy efficiency.

These measures can be implemented quickly and easily, users feel the change in their accounts very quickly, and the incentives are good for the local economy and job creation, considering that the contractors can be smaller companies or entrepreneurs.

Thermal insulation of facades, replacement of doors and windows, installation of better quality blinds housing, better insulation of roofs, and construction between floors are ways to prevent heat from “escaping” from our houses and apartments. Implementing these measures saves on heating bills in winter, but better insulation also allows less electricity to be used for cooling in summer.

Analysis of research conducted by the Environment Improvement Centre and Klima 101, in the second half of 2021, showed that the most common measures taken by citizens to increase energy efficiency are: window replacement (68% of respondents), followed by thermal insulation of facade (42%) and walls (41%). Interestingly, although it can be seen on thermographic images that it is a significant source of “leakage” of energy, the insulation of blinds housing was performed in only 6% of cases.

In accordance with the results of this research and interviews with numerous experts in this field, we have prepared a Position Paper which, as a first measure, proposes an increase in subsidies for citizens to perform works to increase energy efficiency. In addition, we have proposed 5 more measures that, if implemented, would lead to the significantly more rational use of energy in Belgrade.

This text was created as a part of the project “Energy of Change”, implemented by the Environment Improvement Centre and the Association Klima 101, within the project of the Belgrade Open School “Green Incubator”, with the financial support of the European Union and the Friedrich Ebert Foundation.