The Environment Improvement Centre in partnership with the Klima101 portal, the Center for development of non-formal education and the Association GM Optimist is implementing the project “Climate Forum” which aims to improve the capacity of member organizations, create a new action framework, improve dialogue with all stakeholders and start creating specific scientific and professional products intended for better informing and education of citizens.

The issues of climate change and energy transition have been neglected in Serbia for many years. Inactivity in these areas has also affected the opportunities for citizens to participate in the public debate on climate change issues and their involvement in the implementation of mitigation and adaptation measures, which has resulted in insufficient involvement of civil society organizations (CSOs) in processes of policy making in this area. In addition, the growing concern of citizens about poor air quality, as well as numerous other environmental problems, has led to more frequent protests.

During the spring of 2021, Republic of Serbia adopted the Law on Climate Changes, as well as a set of laws in the energy sector, including the Law on the Use of Renewable Energy Sources. The provisions of the Law on Climate Change are mostly related to the regulation of the area of ​​monitoring, reporting and verification of greenhouse gas emissions, harmonization of domestic regulations with those in force in the European Union. The law also envisages the adoption of the Low Carbon Development Strategy, the Action Plan for the implementation of the strategy and the Program for Adaptation to Changed Climate Conditions. This will, in the next two years, essentially determine Serbia’s ambitions when it comes to the fight against climate change. The Law on the Use of Renewable Energy Sources creates opportunity for greater penetration of renewable energy sources into the Serbian energy system and introduces the “producer-consumer” institute, which facilitates the participation of citizens and businesses in the electricity market. In the coming months, Serbia is expected to adopt the National Determined Contribution (NDC) as part of the obligations envisaged by the Paris Agreement, as well as development of the Integrated National Plan for Energy and Climate.

All this indicates a very dynamic period when it comes to the area of ​​climate change in Serbia and a much wider space for the participation of citizens, academia and CSOs in the process of adopting strategies and plans in this area. For this reason, this project will serve to improve the capacity of civil society so that they can participate more actively in these processes and influence the creation of better public policies in this area.

Overall goal of the project

Contribution to the constant work of the Climate Forum on climate change reforms and monitoring of Chapter 27 through strengthened capacities, network visibility and improved dialogue with decision makers at all levels.

Specific objectives of the project

“111 questions and answers about solar energy” provides all important and practical information on the application of solar systems for electricity generation in Serbia. 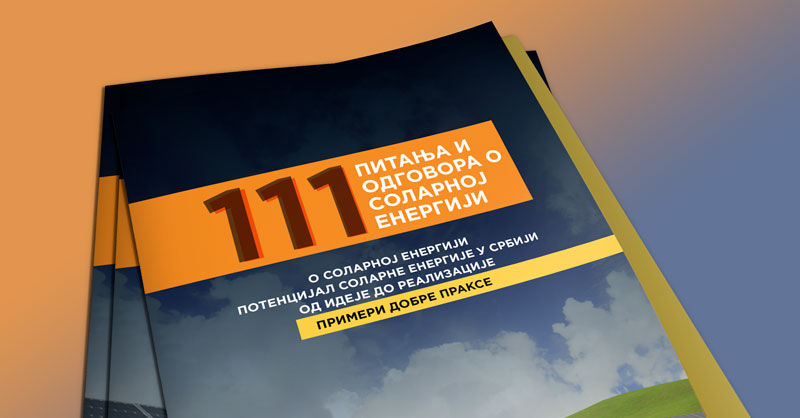 The future of green building in Serbia

How can Serbia decarbonise its energy production system?

This page was created within the program ECO-SYSTEM: Support to Environmental Reforms, implemented by Young Researchers of Serbia, with the support of Sweden through the Swedish International Development Cooperation Agency. The content of this page is the sole responsibility of the author. Young researchers from Serbia and Sida do not necessarily share the views and interpretations expressed in this page.