Almost all citizens (99,7 per cent) fully or partially agree that using single-use plastic is problematic for the environment and human health. The introduction of a deposit return system with financial compensation (almost 95 per cent), taxation of plastic that cannot be recycled or reused and a stricter penal policy for subjects and individuals who do not respect the laws in this area, citizens see as an effective solution in the fight against single-use plastic shows an Analysis of research on the attitudes and habits of citizens regarding single-use plastics published by Environment Improvement Centre.

Approximately the same percentage of respondents (about 82 per cent) chose plastic carry bags and PET bottles as the most problematic type of single-use plastic, followed by plastic grocery boxes (32,35 per cent).

The research showed that the level of information about the harmful effects of plastic is at a satisfactory level. More than half stated microplastics which enter the food chain of all living beings are the biggest problem associated with the use of plastic, while more than 40 per cent believe that it is a long period of decomposition. Only 0,30% of surveyed citizens think that plastic is not an environmental problem.

However, research shows that citizens are poorly informed about which types of plastic can be recycled. Only every fourth respondent is aware that not all types of plastic can be recycled. The lack of trust in the existing systems for disposal of plastic for recycling is also worrying which negatively affects the motivation of citizens – more than 60 per cent of respondents state they would regularly separate plastic waste for recycling if they were sure that the waste is actually recycled.

Plastic bags and their alternatives

Almost 95 per cent of the respondents fully or partially agree with the statement that it is not a problem for them to use an alternative to plastic bags, while about 45 per cent of them confirmed that they always carry a cotton bag when they go shopping. However, almost nine out of ten citizens, who do not always carry a cotton bag, reported that they “regularly” forget to bring a bag with them when shopping.

When someone would remind them (53,41 per cent), and if they would raise the price of plastic bags in the store (23,84 per cent), are the two answers are perceived as the most favourable means of motivation to overcome the said “forgetfulness” in bringing a cotton bag in shopping.

When asked what they do with the plastic bags after shopping, three-quarters of the respondents said that they reuse them for something else – most often as a garbage bag, followed by the answers: I reuse them for shopping (42,11 per cent), I throw it in the garbage (15,88 per cent), and almost ten per cent said they separate it and put it in a bin for plastic waste, even though the practice of separate collection and recycling of plastic bags does not yet exist in Serbia.

Ban on plastic bags is one of the solutions that is mentioned in many open answers on this topic, and although such a ban cannot be implemented in the short term, the demotivation to buy bags of inadequate thickness and characteristics which will lead to the final ban seems as the most realistic way to reduce pollution from this type of disposable products.

Almost 95 per cent of citizen fully or partially support the introduction of the deposit return system and considers it a desirable solution for reducing the amount of PET packaging. The introduction of DRS for PET packaging is fully acceptable for all age categories, and we note this support is over 90 per cent and is highest in the age category of 35 to 39 years with a support of a fantastic 98 per cent.

On the question about the amount of the deposit, more than a third of respondents said the amount should be greater than 10 dinars, while every fifth citizen believes it is desirable that an amount is between 6 and 8 dinars. If we exclude the responses of enthusiasts who would return PET packaging free of charge, it is unambiguously observed that the amount of the deposit is directly related to a greater motivation for returning PET packaging.

In general, it can be concluded that citizens have a solid level of awareness about the harmfulness of single-use plastics in a broader sense, but that it is necessary to work on further informing and educating the public in order to continue building a society that actively participates in the fight against single-use plastics.

Our respondents showed with their answers that there is a significant interest in this topic, and it is up to government authorities and decision makers to hear their voice and decisively implement the introduction, implementation and regular control of compliance with regulations that are becoming the standard for single-use plastic management worldwide.

Since recycling is not the final and only solution in the fight against plastic waste, it is necessary to constantly promote life with as little (single-use) plastic and rational use of products made from alternative materials. Also, it is extremely important to restore trust in the system of primary selection, recycling and waste management through further creation and enabling of infrastructure for waste disposal, but also more efficient and transparent operations of all actors in the chain of waste management in the Republic of Serbia. 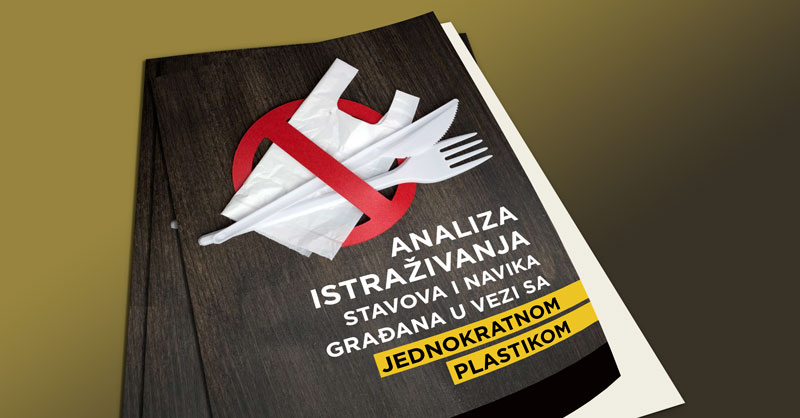 The research was conducted in June 2022 with the participation of 1014 citizens from the territory of the Republic of Serbia. The research was conducted as part of the “Plastic Civilization” project, which is implemented by the Environment Improvement Centre, as part of the “Green Incubator” project of the Belgrade open school, with the financial support of the European Union and the Friedrich Ebert Stiftung.